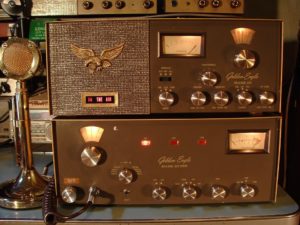 CB Radio In The USA

C.B. Radio was first introduced to the UK in the early 1970s. . Citizens band radio has been popular in America as far back as the late nineteen fifties and it was these US Rigs which were first used illegally in the UK.  CB Radio was popularised in the mid Seventies by various novelty songs and in hit movies like Convoy and Smokey & the Bandit and the use of imported AM Rigs hit its peak around 1980 as various companies sold these illegal AM Rigs which were available to buy from most car accessory shops.

Various CB Clubs sprung up around the country and it was these clubs which began to lobby for the legalisation of Citizen Band Radio so that these imported AM rigs could be used legally.  In response, the government commissioned a white paper proposing a CB Service around 860 Mhz called ‘Open Channel’

An issue in the UK was that the 27Mhz frequency used by the American AM Rigs was already allocated to model aircraft users who paid for a licence to use the band and there were various cases reported of the control of model aircraft being lost due to radio interference from these CB Radios.  Many expensive radio controlled models were totally written off which also caused safety concerns but it was difficult to police and the government did not see the flying of model aircraft as a serious issue.

CB Radio Legalised in the UK

On 2 November 1981 the Government eventually legalised C.B. Radio, and a C.B. service was introduced on an offset frequency band that was incompatible with American AM radios and ownership of non-UK approved 27 MHz transceivers was made illegal except for those with UK radio “A” (HF) Amateur Radio licences for conversion to the 28 MHz (10 metre) amateur band.

A licence to operate these new radios became compulsory which could be obtained from most Post Offices for £15. Unlike Radio Amateur licence, no proof of technical competence was required.

Since 8th December 2006, a licence is no longer required to own or operate a C.B. Radio providing it complies with one of the three conditions permitted by Ofcom.  Legal CB Radios must be, FM only, 4 watts maximum power output and operating on either or both UK and CEPT (EU) 27 MHz bands.

In the run up to the legislation, most of the pro-C.B. lobby wanted the government to legislate around the U.S. standard C.B. system, due to the large number of CB users already using them.  The UK government made it clear that legislation for use of this equipment would be highly unlikely.

Interference problems associated with badly calibrated amplitude modulated (AM) or Single Side Band (SSB) radios  were cited as the main factor and it was stated  that if any system was legalised it would be frequency modulated (FM) and not AM because of this.

The C.B. lobby argued that interference from AM was unlikely to occur from the use of original unmodified AM radio equipment, this was rejected but later accepted by the Ministry of Defence.  Many active and potential CB Radio users continued in their insistence on a 27 MHz system, although this was not universally endorsed.

The government initially proposed a FM system on a 928 MHz band with an RF Input power of no more than 500 mW. This was not acceptable to the C.B. lobby partly because the low power would only give a very short range, the cost of this new equipment would be very prohibitive.

The more knowledgeable C.B. enthusiasts made a counter proposal to use the 220 MHz frequency but this was immediately dismissed by the government since it was already reserved for military operation although the frequency had not been in use since the Second World War. The government however continued in their insistence on legalising the 928 MHz band.

The C.B. lobby continued to insist that any C.B. system had to use the 27 MHz band, be AM and a at a maximum output power of 4 watts meaning the original American rigs could still be used.

These frequencies would prevent illegal U.S. sets from being used although it was possible to have existing A.M. radios modified to comply with the new F.M. standard.  The choice of frequency would also give the U.K. electronics industry a virtual monopoly in the production of these unique U.K. only radios. The system was FM as expected, but there was an initial surprise that the power limit was to be set at 4 watts. 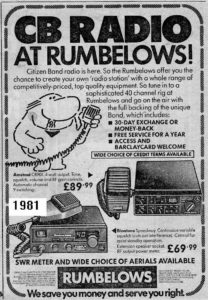 The government of the day had hoped that UK based manufacturers would be able to compete with foreign manufacturers for a share of the potential market. The frequencies used though meant that only one manufacturer in Japan had the capability of produce frequency synthesiser chips capable of producing the transmission frequencies and local oscillator signals for use in receive mode.

This manufacturer, not surprisingly, refused to supply any UK manufacturer while it supplying Japanese manufacturers. The UK market was quickly saturated and within a few months many Japanese manufacturers and UK importers were left with large quantities of unwanted stock. Within a year of the introduction of C.B. to the UK, C.B. radio sets were being given away free with some purchases by many of the major high street retailers.

20 channels in the 934 MHz band had also been legalised, but this equipment was considerably much too expensive when compared to the more established 27 MHz sets. At first the range was limited, but as antenna restrictions were lifted and better equipment was produced, the number of C.B. operators grew.

In 1988, it was announced that the manufacture of 934 MHz equipment would be stopped, although the use of this equipment would continue to be legal. Although largely confined to enthusiasts and amateur radio operators, the type approval specification for this band was finally withdrawn on 1 January 1999 and it is now illegal to use this equipment in the UK.

On 1 September 1987 an additional frequency band was legalised giving a further 40 channels in the CEPT Band,(26.965 MHz to 27.405 MHz) and  some antenna restrictions were lifted, in recent years all antenna restrictions have been removed and planning constraints now restrict antenna size rather than regulatory compliance. It is not permitted to add the CEPT channels to existing 27/81 equipment, the only radios permitted to operate on this band are purpose made 80 channel or CEPT only sets.

When CB Radio was first legalised it was taken up enthusiastically by all those who had not wanted to use an illegal system.   The system quickly began to suffer from nuisance users who blocked the recognised calling channels by transmitting a blank carrier and music. Having won the fight to legalise CB Radio, the many nuisance users caused interest to rapidly diminish rapidly,  the C.B. clubs gradually dwindled in membership, many disappearing altogether.

The anti-social aspects to the hobby and with the ability to increase power output to very high levels using power amplifiers which can cause interference to and affect the operation of other equipment such as television and radio, and creates bleed over to other channels creating problems for other CB Radio users.

The band used for C.B. was already allocated in the UK to radio controlled models. While this was usually little more than a frustrating and expensive nuisance for boat and car modellers, it did pose a genuine danger for aircraft models, which can kill[16] or seriously injure. As a result of the C.B. craze, an alternative band of 35 MHz.[17] was offered to modellers, to use which they would have to buy new equipment.

Their old equipment could still be used if they wished to risk it, and 27Mhz remains legal for remote control to this day. Many cheap toys and household remote control equipment also use the frequency, adding to the interference and lack of reliability which is still a feature of this band.

Since the launch of legalised C.B. radio, there has been a lot of abuse of the system, with frequent complaints that C.B. radio was not policed properly in spite of licence revenues.

Even though mobile phones have become increasingly more common and feature rich C.B. channels still remained busy in many areas.   Many of the advantages of C.B. have been surpassed by the development of mobile internet access, satellite navigation systems, and the proliferation of other instant communication technologies such as text messaging.

The introduction of a new licence free handheld PMR 446 radio service has provided much of the features of traditional C.B., in a small handheld format. This service is not directly comparable with C.B, as PMR446 was intended to provide a short range service.

Changes to the U.K’s amateur radio licensing system mean that it is now possible for people under the age of 14, and anyone else, to gain legal access to most of the U.K. amateur frequency allocation with only basic technical knowledge.

Following most other European countries, Ofcom proposed to adopt European Communication Committee Decision in October 2013.  This would permit the use of Single Sideband and AM operation on the CEPT CB radio band and Ofcom proceeded with legislation to this effect on 27 June 2014.

The new AM/SSB legislation only permits the use of new and approved sets, not ‘legacy’ multimode sets.

SSB and AM Frequencies Now Legal 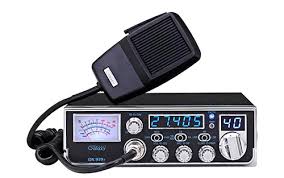 SSB takes advantage of the fact that the entire original signal is encoded in either one of these sidebands. It is not necessary to broadcast the entire mixed signal, a suitable receiver can extract the entire signal from either the upper or lower sideband. This means that the amplifier can be used much more efficiently. A transmitter can choose to send only the upper or lower sideband, the portion of the signal above or below the carrier. By doing so, the amplifier only has to work effectively on one half the bandwidth, which is generally easier to arrange. More importantly, with the carrier suppressed before it reaches the amplifier, it can amplify the signal itself to higher energy, it is not wasting energy amplifying a signal, the carrier, that can (and will) be re-created by the receiver anyway.

As a result, SSB transmissions use the available amplifier energy more efficiently, providing longer-range transmission with little or no additional cost. Receivers normally select one of the two sidebands to amplify anyway, so implementing SSB in the receiver is simply a matter of allowing it to choose which sideband to amplify on reception, rather than simply choosing one or the other in the design stage.